Leeds Rhinos the successful super league ruby team based in Leeds at the Headingley Carnegie Stadium contacted us to provide a sharps bin collection and contract disposal service for their on site medical facilities. 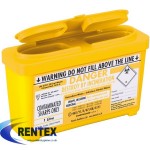 Our office team worked with the facilities manager at Leeds Rhinos to supply a cost effective and legal solution to the problem of sharps disposal at the Leeds Rhinos facilities.

Leeds Rhinos sharps disposal units are provided by Rentex and disposed of complying with the Hazardous Waste Regulations 2005, upon each collection of sharps a consignment note is provided to Leeds Rhinos to comply with current regulations.

Leeds Rhinos are based in Leeds West Yorkshire.

Take M621 – Leave at junction 2, sign posted Headingley Carnegie Stadium then. follow the A643 (A58) Wetherby road – at the next roundabout take the City Centre/Wetherby A58 exit. Almost immediately, bear left to Ilkley (A65) and the airport signs. At the lights (TGI Fridays is on the left), take left turn into Kirkstall Road A65. Go straight on for approximately 0 .75 mile Yorkshire Television is on the right.

There is a sign at the traffc lights showing “Headingley 1.5 miles, stay in the right-hand lane. Turn right and go up the hill to another set of traffic lights at the crossroads. Carry straight on up Cardigan Road the Co-op is on the left. After the pedestrian traffic crossing lights and bus stop turn left into St Michael’s Lane, signposted Headingley Stadium. The Leeds Rhinos ground is on your right hand side.

For details of all bus routes to and from Headingley Carnegie Stadium go to Google maps or contact your Metro advice on Tel 0113 2457676.